I ‘met’ Rob in 2013 through Facebook. I was fascinated by his passion and self-determination as he travelled across America under what, for most of us, would seem like impossible circumstances. I followed his adventure and was constantly entertained by some of his antics and my admiration for him grew daily. I have looked forward to reading this book for a long time and I wasn’t disappointed. I discovered that things were often tougher than he communicated at the time but despite this, his positive attitude and determination never seem to falter. Rob is an inspiration in many ways and shows us how the tiniest of positive changes can lead us being happier people, living in a happier and healthier world.

First though, let’s be clear, Rob Greenfield is unlike anyone ‘dude’ you’ve probably met before. This modern day adventurer is a campaigner of a different kind and his motivation is not to conquer his environment but to treat it kindly and bring us to our senses so that we do the same. His book ‘Dude Making a Difference’ is the account of his 104-day trip, riding a bamboo bicycle, coast to coast across America while raising funds for ‘1% for the planet’. This would be challenging enough for most people but Rob uses his journey to demonstrate what low-impact living looks like, which in turn raises the question – what effect does high-impact living having on our environment?

As if the journey wasn’t challenging enough Rob also created a list of rules which limited his ability to rely on the modern world to support him as he travelled. He pledged that he would create as little waste as possible (and carry it with him), would only eat locally grown produce or food he found in dumpsters, would use natural sources of water for bathing and solar energy for his computer and phone. He also set his intention to keep a positive mindset and refrain from swearing, alcohol and drugs. To the reader, it may seem that he set himself up for failure before he even started and perhaps this is one of the reasons the book is intriguing from the outset.

Rob kept notes and took photos of his journey as he travelled and many of these appear in the book along with stories of the people he met along the way. Frequently, he turned down invitations to sleep in a comfortable bed and have a hot shower, choosing instead to sleep in outside in his tent. These must surely have been tempting propositions that few of us could have resisted? I loved the fact that Rob took with him ‘seed-bombs’ of native wild flowers to plant along his way which left me the romantic notion there is a blooming Greenfield trail that stretches across America, the only evidence he left of his presence.

Rob set out to get our attention, not to him but to his message and he succeeded. He used extreme methods to let us know that we only need to make a slight change in order to create an enormous difference and I believe him. Perhaps the book should come with a warning that it will cause you to change because I’m sure it will. As Rob brings things into our awareness we can no longer be ignorant of the facts and this gives us the responsibility of choice. Few, if any of us could attempt to take the journey that Rob did, or live the way he does, but we can change a little and this is Rob’s point. He doesn’t want us to make radical changes but subtle ones, which will benefit us all.

Rob is cheery, optimistic, resilient, humorous and energetic and I wonder whether this is partly because of the lifestyle he leads? He makes a great case for living a simple, mindful life, in touch with nature. As an Applied Positive Psychologist I can’t help wondering whether saving the planet might also save its inhabitants from stress, worry and depression. Maybe Rob provides us with the example of why ‘less is more’? I highly recommend you buy this book for yourself and friends and members of your family especially as Rob is donating 100% of the proceeds to grassroots environmental nonprofits.

Rob Greenfield provides information, hope and inspiration to encourage and educate and he has come a long way since he set out on his bamboo bicycle on his ‘impossible’ mission. I recently met up with my virtual friend when he invited me as a guest to hear his presentation at the TEDxTeen event at O2 arena.  His influence is spreading far and wide,  encouraging us to make a small difference so that collectively we can create a huge change. Rob Greenfield really is, a ‘Dude Making a Difference’! 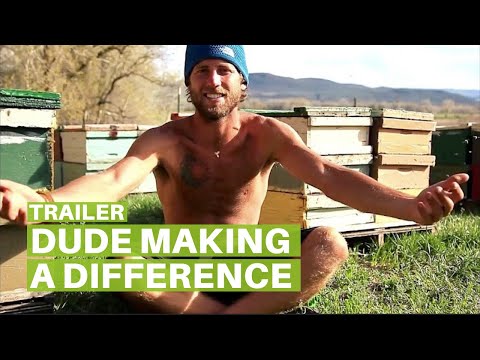 We use a few cookies to ensure that we give you the best possible experience on our website. If you continue to use this site we will assume that you are happy with it. Press 'no' to refuse third party functional cookies and please feel free to read our privacy policy. OkNoPrivacy policy